While the idea of ​​getting stung isn’t exactly appealing, a new study may make you think twice about eliminating pesky bees.

Researchers from Queen Mary University of London have revealed that bumblebees can feel pain.

In the study, the team showed that bumblebees can alter their response to “harmful” (painful) stimuli in the same way as other animals known to feel pain.

“While insects can feel pain, humans have an ethical obligation not to cause them unnecessary suffering,” said Matilda Gibbons, first author of the study.

“But UK animal welfare laws don’t protect insects – our study shows they may have to.”

While the idea of ​​getting stung isn’t exactly appealing, a new study may make you think twice about killing pesky bees 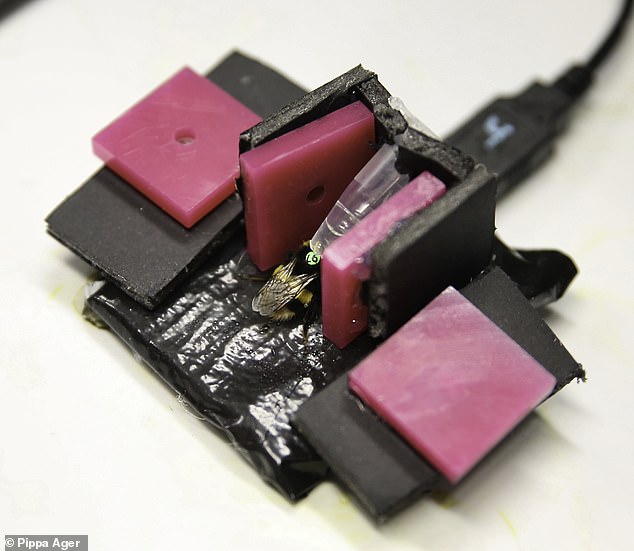 Chronic pain is defined as pain that persists after an initial injury has healed, said researchers from the University of Sydney.

Like humans, fruit flies experience a particular type of so-called neuropathic pain, which occurs after damage to the nervous system.

Humans can experience this kind of pain after suffering from sciatica, spinal cord injury, or a pinched nerve.

When a fruit fly had a damaged nerve in one of its legs, its other legs reacted by becoming “hypersensitive” to dangerous stimuli.

The fly receives “pain” messages that travel through sensory neurons to its ventral nerve cord.

After that, their pain threshold is permanently altered and they become “hypervigilant” as they attempt to detect potentially harmful stimuli.

“We found that bumblebees react to hurt in a non-reflexive way, in a way that suggests they are feeling pain.”

In their study, the team used a “motivational trade-off paradigm,” in which animals must make a flexible trade-off between two competing motivations.

In this case, the bees had the choice between an unheated feeder or a feeder heated to 55°C – harmful heat.

The feeders contained different concentrations of sucrose and were marked with different colors.

When both feeders contained high concentrations of sucrose and one was heated, bees tended to opt for the unheated feeder.

But when the heated feeder contained a higher concentration of sucrose, bees were more likely to visit it.

The researchers also made sure that the trade-off was based on cues (colors), which the bees had learned to associate with a higher sugar reward.

Because the bees used learned color cues for their decisions, the trade-off was processed in the brain rather than peripherally. 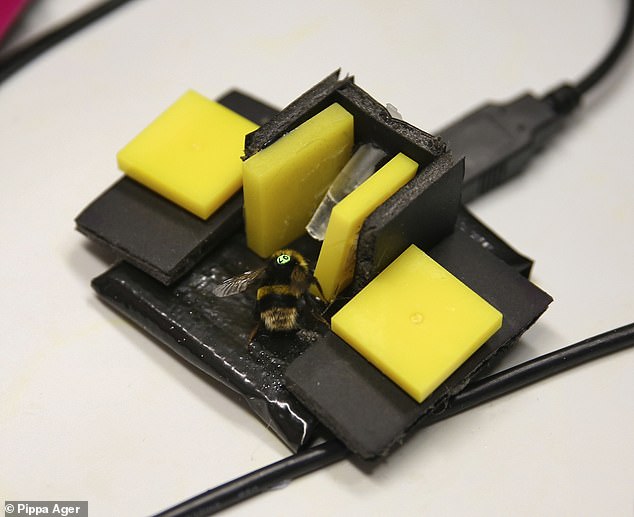 The researchers also made sure that the trade-off was based on cues (colors), which the bees had learned to associate with a higher sugar reward. Because bees used learned color cues for their decisions, trade-off was processed in the brain rather than peripherally.

In other words, the bees made the decision to undergo pain in order to obtain a higher sugar reward.

Professor Lars Chittka, who led the research, said: ‘Insects were once thought of as mere reflex automata, responding to noxious stimuli only with withdrawal reflexes.

Based on the findings, the researchers suggest insects should be included in animal welfare laws

“Our new work shows that bees’ responses are more flexible and that they can suppress these reflexes when it suits them, for example if there is an extra-sweet treat to take.

“Such flexibility is consistent with the capacity for a subjective experience of pain.”

Based on the findings, the researchers suggest insects should be included in animal welfare laws.

“Insects (unlike vertebrates) are not currently protected by any legislation regarding their treatment in research laboratories and in the growing industry that produces insects for human consumption or as feed for conventional livestock,” the professor added. Chittka.

“The legal framework for the ethical treatment of animals may need to be expanded.

“The growing evidence for some form of sentience in insects compels us to conserve the environments that shaped their unique and seemingly alien minds.

“We humans are just one of many species capable of pleasure and pain, including painful states.

“Even miniature creatures such as insects deserve our respect and ethical treatment and duty to minimize suffering where it is within our power to do so.”

The decline in the numbers and health of honey bees has caused global concern due to the critical role of insects as a major pollinator.

Bee health has been closely monitored in recent years as nutritional sources available to honey bees have declined and pesticide contamination has increased.

Bees use sugar to fuel their flights and work inside the nest, but pesticides lower their hemolymph (“bee’s blood”) sugar levels and therefore reduce their energy stores.

When pesticides are combined with limited food supplies, bees lack the energy to function, causing survival rates to plummet.